I came across a pattern for a simple doll that is reminiscent of the “old fashioned” rag dolls – dolls that were hand sewn  from scraps of fabric, usually left over from a hand made dress or curtain.   Here are two I recently finished…one is a gift for a friend and the other will be added to my rag doll collection. 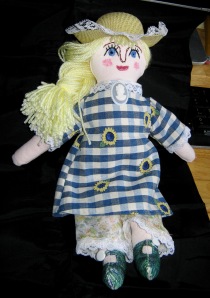 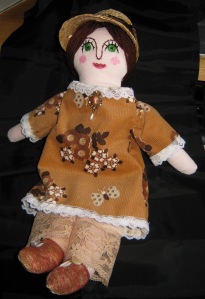 The dolls measures 14″.  The head and torso are one piece with sewn on legs and arms.  All the outer clothes and facial features are hand sewn…there were often no sewing machines available so everything was hand stitched.  The fabrics are vintage for the dresses and pantaloons, but the hats are new.

They were fast and fun to make!

This past spring, my doll club, the Catskill Mountain Doll Club was trying to decide on a project that would include making doll heads…but no one was interested in crafting – or buying the expensive – bodies that go with small porcelain head. So we decided to make “marotte” dolls!

Marotte is a French word which means “frivolous amusement”.  Such was the name given to the toy made in France in the last half of the 19th century.  Essentially a marotte doll is a doll’s heads attached to a dowel or stick…adorned with various decorations and a music box.

When the stick is swung around, it activates the musical movement producing an attractive effect combined with the bells decorating the pointy ends of the gaudy dresses.  The heads and costumes often depicted a jester or harlequin. 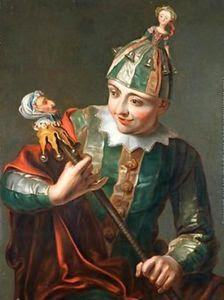 Painting of a boy with a marotte doll.

Club  members cleaned and china painted a variety of milette heads and used these as the basic head for their marottes.  Below are four marottes I made: 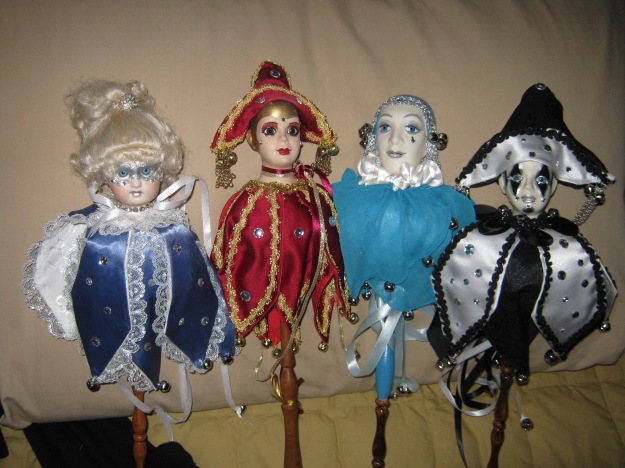 The red and b&w marottes heads are cast from the “Cocoa” mold by Seeleys.

The gaudy outfits swing freely when the dowel is twisted…there is the sound of bells…a music button was added to two of the dolls to afford music as well.

They were fun to make and really offered the opportunity for creativity!